It is important to know where the perilymph sample came from  in order to interpret what it's composition means.

When drugs are applied locally to the inner ear (such as by intratympanic applications) they do not distribute homogenously throughout the cochlea. Drug concentration in one region is different from other regions. As a result, if perilymph sampling is used to establish drug concentration the measured concentration depends critically on:

1) Where on the otic capsule the sample was taken

2) The method used to collect the sample, primarily how fast it was collected.

Interpretation also assumes that the collected sample is primarily perilymph, which is not always the case. There are some common artifacts in which the perilymph sample can be contaminated by significant amounts of cerebrospinal fluid (CSF) or endolymph, making interpretation more difficult and in many cases, impossible.

Sample origins differ between humans/non-human primates and rodents due to the different physiology of the cochlear aqueduct. The cochlear aqueduct connects perilymph in the basal turn of scala tympani to the cerebrospinal fluid of the subarachnoid space. In rodents, any perforation of the otic capsule releases cochlear pressure and results in relatively rapid CSF inflow at the aqueduct. The rate is similar in guinea pigs and in mice, ranging from 0.5 to 2 uL/minute. In primates, the aqueduct is much narrower, not necessarily occluded but only allowing flow at much lower rates, often not apparent to the surgeon. In practice, rodents immediately leak fluid at a substantial rate when the cochlea is perforated, while primates do not. This is an enormous difference when it comes to fluid sampling.

To understand the origins of a sample, you must know where the fluid you are taking out is replaced from. Is it replaced by air, pulled into the scala as the sample is withdrawn. Or is it replaced by fluid movements inside the cochlea and the fluid is taken

Methods used to collect a sample

1) Aspiration into a fine-tipped pipette connected to a syringe, used to generate a substantial negative pressure (suction). Sample can be drawn up slowly or rapidly, depending on the tip diameter of the pipette.

2) Collection into a blunt-tipped capillary tube. Surface tension of the fluid meniscus in the tubing generating a small negative pressure that draws fluid up. The sample typically accumulates slowly, up to 3 mins to collect a 1 uL sample

3) Collection with a hand-held micropipetter, using the piston in the micropipetter to provide suction. The sample is collected very rapidly, less than a few seconds

Sampling at the base of Scala Tympani

Sampling from the basal cochlear turn of scala tympani, either through the round window membrane or via a cochleostomy has, over the years, been widely used to collect perilymph samples. The figure below illustrates why the technique is appropriate for use in humans and other primates but why it is unacceptable for use in rodents. 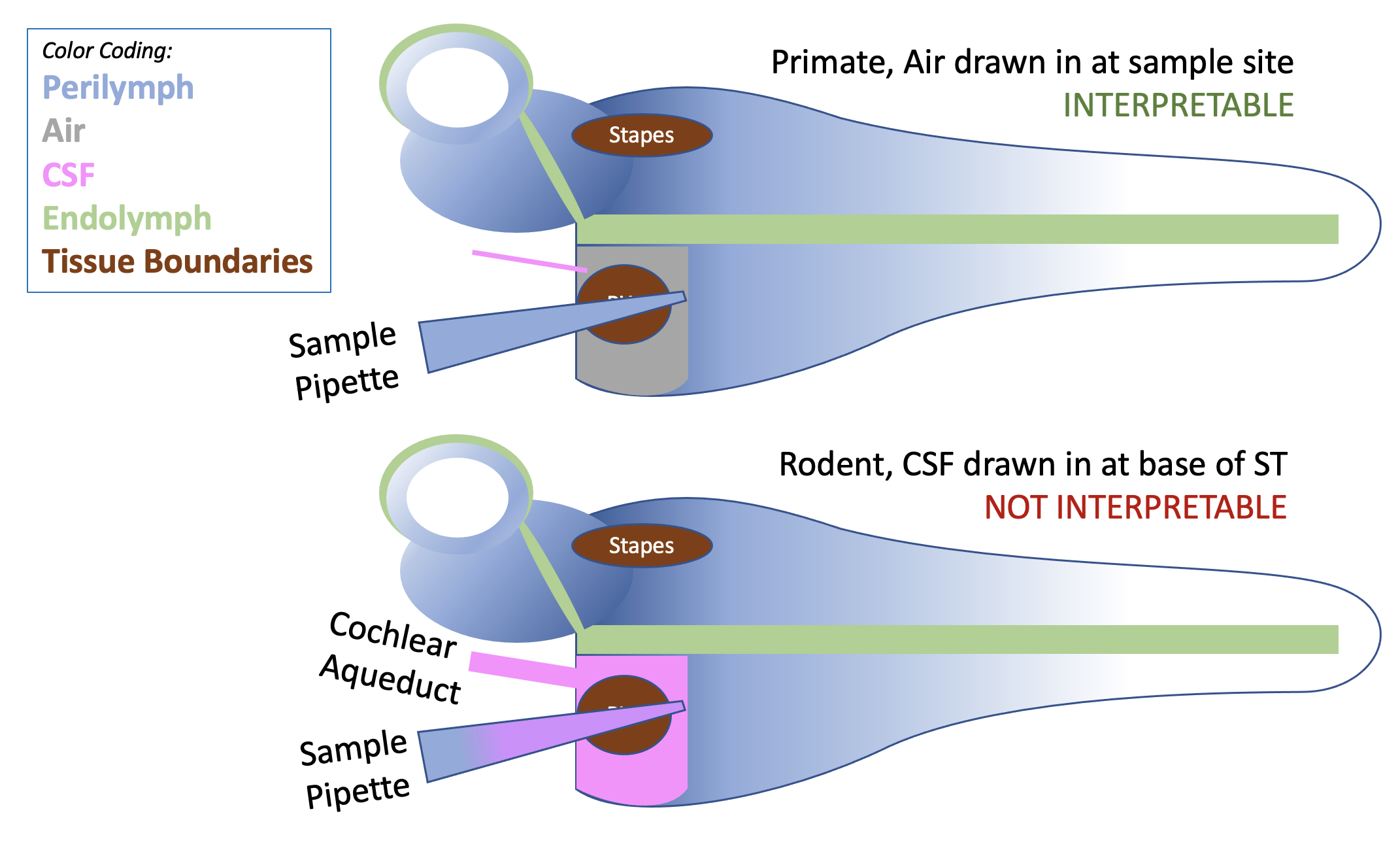 Comparison of basal turn sampling in rodents and primates. In primates, air is typically drawn into the scala as the sample is aspirated. Air cannot contaminate the fluid sample, so the sample provides a good representation of basal turn concentration. In rodents, CSF is drawn into the cochlea as the sample is taken, diluting the drug measurement. A 5 uL sample taken from the basal turn of a guinea pig contains less than 20% perilymph and more than 80% CSF (Salt et al., 2003). This degree of error, compounded with variation in the error magnitude from animal to animal, makes the technique unacceptable.

The situation when perilymph is sampled through a cochleostomy is even worse. In this case, as soon as the cochleostomy is made (with a burr or sharpened needle), perilymph starts leaking out, driven by CSF entering at the aqueduct. By the time the collection pipette has been positioned and inserted into the cochleostomy, a substantial portion of the original perilymph in the basal turn will have been replaced by CSF. There are many, many papers in the older literature (prior to our 2003 publication demonstrating the problem) in which detailed analyses were performed on samples that were simply not perilymph. A lot of papers you just can't trust.

The solution to the problem in rodents is to take samples from sites as distant from the cochlear aqueduct as possible, either from the cochlear apex or from a semi-circular canal. These techniques were adapted to become the “Sequential Sampling Techniques” we currently use, which are described on another page.

With the advent of sampling from sites distant from the aqueduct and demonstration of the contamination issues, the number of publications using basal turn sampling in rodents has declined substantially. Occasionally a paper pops up using the antiquated methodology – from people who apparently don’t follow the literature. Are you going to trust their data?

Sampling at the Cochlear Apex

Sampling from the apex has proven to be a very valuable technique in guinea pigs because the fluid collected represents perilymph that has been displaced from scala tympani, allowing measurements to be interpreted with confidence. The FluidSim program includes simulation of sequential sampling procedures, allow simulations to be fitted to the measured sample data. 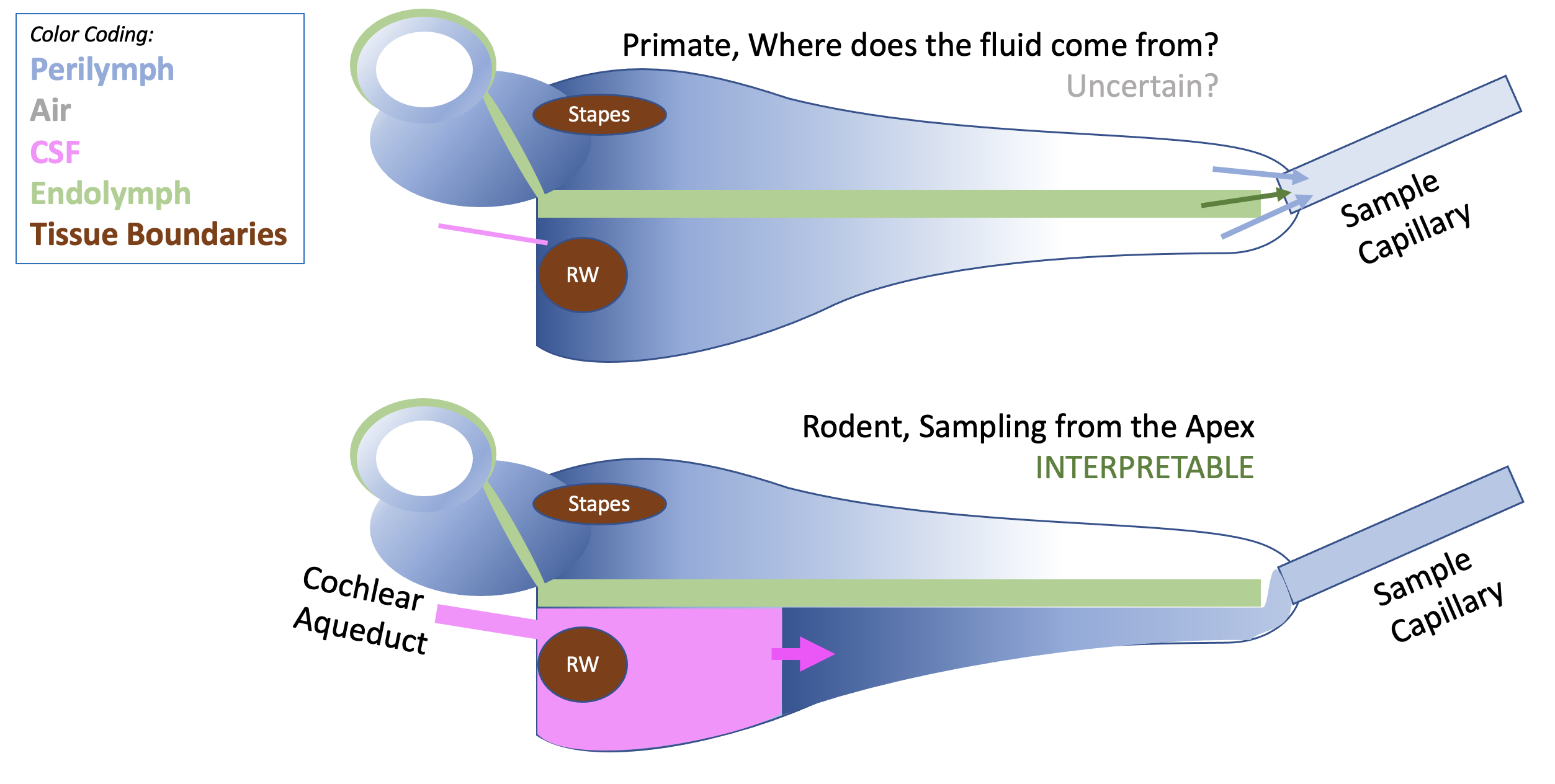 Sampling from the apex has recently been performed in primates (Manrique-Huarte et al, 2021) but is much more difficult technically and interpretation is problematic. The main difficulty is that when the apex is perforated fluid only emerges at a very slow rate, taking 1-2 hours to collect 10 x 1 uL samples (compared to about 10-15 min in guinea pigs). The measurements are not consistent with fluid flow being driven along ST by CSF, as it does in the guinea pig. Where the fluid that replaces perilymph comes from remains uncertain, which make interpretation difficult.

Sampling Perilymph from a Semi-Circular Canal

Sampling from the lateral SCC (more accessible in guinea pigs) has also been used to differentiate vestibular and tympanic perilymph, allowing relative entries through the round window membrane and stapes to be compared.

To date there have been no studies sampling perilymph from the SCC of primates, and no compelling reason to do so.