The information on this page is of the utmost importance for anyone considering candidate drugs for use as local therapy of the human inner ear. Some drugs have properties that work well with local delivery. Others do not. Choosing the drug that has highest potency with an in vitro preparation is the worst possible approach. After years of development, you may find that your chosen drug has properties that make it almost useless for local therapy of the human ear. Physical properties of the drug need to be considered at the very earliest stage of the development process.

So, why are the physical properties of the drug important? It is because the main internal barriers of the body are formed by cell layers with "tight junctions" between them. The tight junctions limit the passage of drugs between the cells. In order to pass through the cell layer the drug therefore has to pass through the cells. This is true for the gut epithelium and for the blood-brain barrier. In the ear, drugs have to pass though the epithelium covering the round window membrane to get into perilymph. More importantly, locally-applied drugs can pass though the endothelial cell layer of the capillaries and “escape” to the vascular system. The main limiting factor controlling passage though cellular barriers is how easily the drug passes through the lipid membranes of the cells. It has now been shown that two molecular properties dominate the passage of drugs across membranous biological barriers:

1) WLOGP A measure of the lipophilicity of the drug. WLOGP is a calculated measure equivalent to the partition coefficient of the molecule between aqueous and lipid phases. Previously this had been measured experimentally by quantifying the distribution of the molecule between octanol and water. There are now algorithms that can calculate a value for any molecule.

2) TPSA This is a measure of the surface area of the molecule covered by polar groups (such as OH- and NH+). Non polar regions of the molecule (carbon rings and chains) do not contribute to this measure. Polar, hydrophilic regions interact with water, making the molecule more water-soluble but limiting their passage though lipid membranes. There are now also algorithms by which TPSA can be calculated for any molecule.

Both of these properties can be calculated by the SwissADME website. In terms of drug pharmacokinetics, this is one of the most important web sites on the planet. The website calculates both WLOGP and TPSA and presents it on an "egg plot", similar to the one shown below. 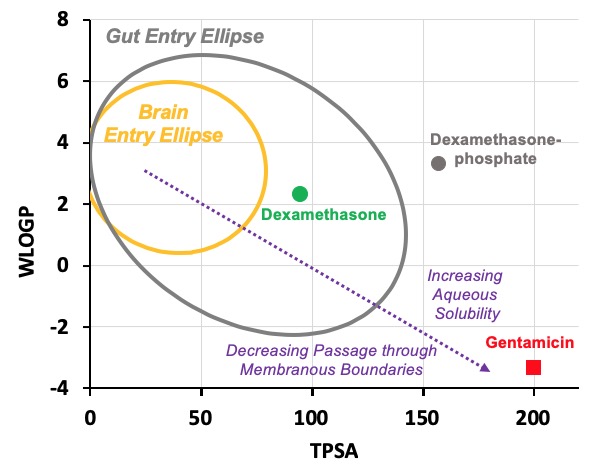 In this case we have calculated values for three drugs widely used for inner ear therapy. The free-alcohol form of dexamethasone is the form used in Otonomy’s formulation Otividex (now withdrawn). Values are also shown for the most commonly-used form of dexamethasone given clinically, dexamethasone-phosphate, and for gentamicin, the first drug that gained popular use as inner ear therapy. Molecules at the upper left of the plot (high WLOGP (lipophilic) and low TPSA (few polar groups)) tend to be insoluble in water but pass easily through lipid membranes. The yellow ellipse in the plot above (the "egg yolk") is a statistical boundary. Molecules within the yellow boundary typically pass though the blood-brain barrier from the vasculature to the brain. Molecules outside the boundary do not readily enter the brain. In contrast, molecules at the lower right (with low WLOGP (hydrophilic) and high TPSA (a lot of polar groups)) tend to be water-soluble but not easily pass through lipid membranes. The white ellipse ("egg white") shows the boundary inside which molecules tend to enter the body by passing through the gut epithelium, making them suitable for use with oral dosing. Molecules outside the white ellipse are not readily taken up through the gut epithelium.

On the basis of such an analysis we expect dexamethasone to pass through boundaries more readily than dexamethasone-phosphate and for gentamicin to be retained in perilymph well. Experimental pharmacokinetic studies of the ear have confirmed that this is correct. Gentamicin is retained in perilymph well. Dexamethasone-phosphate passes only slowly though the round window membrane, but is rapidly metabolized to dexamethasone once it is inside the ear. The egg plot therefore provides a valuable representation of how easily a drug will pass through biological boundaries, including those of the inner ear.

For the local application of drugs to the inner ear (intratympanically), pharmacokinetics and drug distribution are dominated by 3 main processes, shown schematically below (with the cochlea unrolled).

Losses from the middle ear are relatively non drug-specific, but entry into perilymph at the round window membrane and drug loss to the vasculature both depend highly on the ability of the drug to pass through membranous boundaries. The most important of these is the rate of elimination (drug loss) to the vasculature. If drug is lost faster than it diffuses from base to apex, apical regions of the cochlea will never reach a therapeutic concentration.

In order to reach apical regions with local applications the drug must not be “leaky”.

From our experience of inner ear PK (with just 13 molecules), we have found that drug distribution to the apex occurs more readily with polar, non-lipophilic molecules i.e. molecules that do not leak quickly to the vasculature. 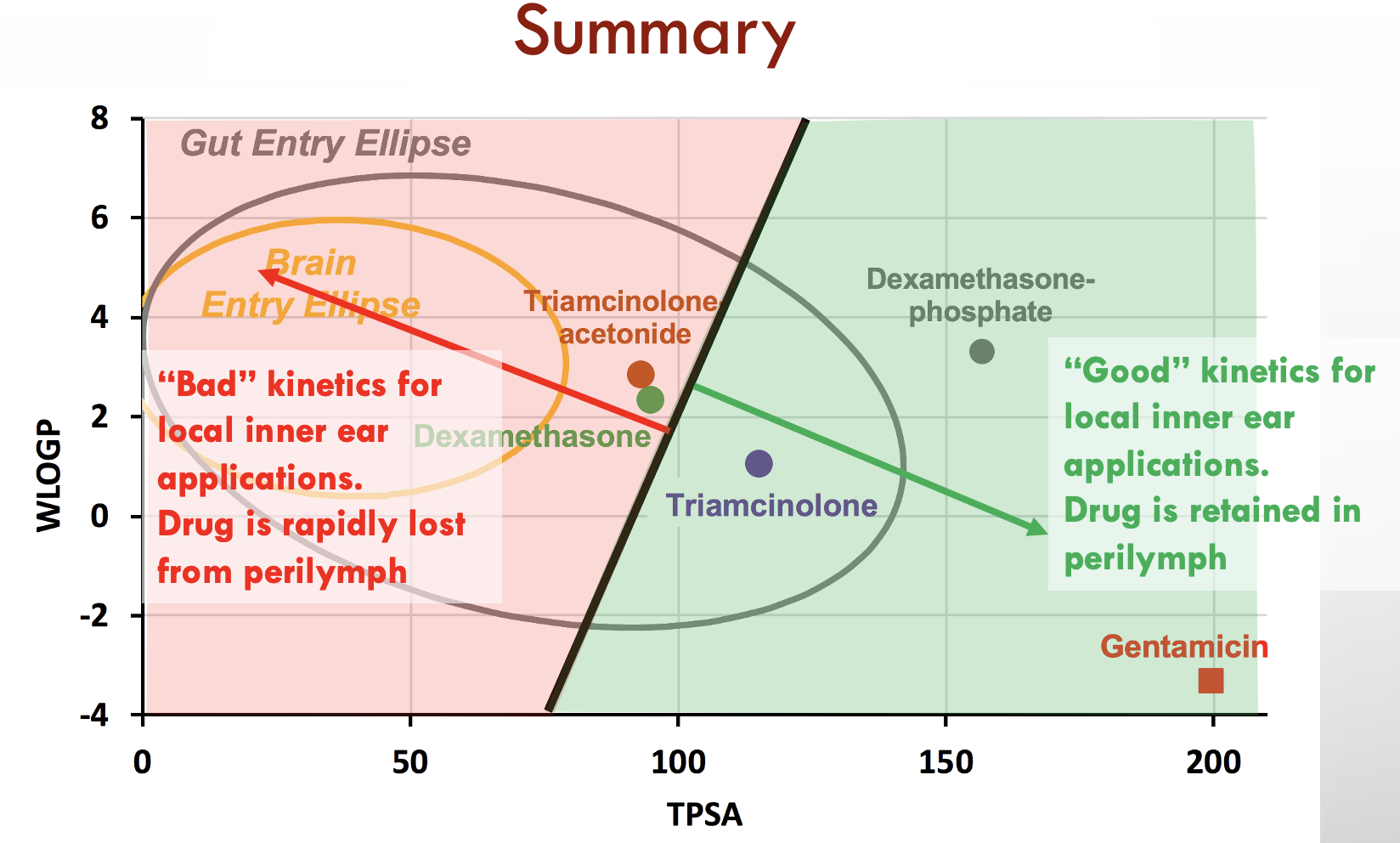 Below is the predicted distribution along the human cochlea for 3 molecules with properties shown in the above plot. The analysis is based on PK studies performed in guinea pigs (from Salt et al., 2019). Triamcinolone is eliminated slowly and is expected to reach apical cochlear regions at substantial concentration (right panel) while the less polar form of the similar molecule, triamcinolone-acetonide is eliminated much more rapidly and will likely not reach apical regions (left panel). Dexamethasone has intermediate PK properties.

The three plots above are all for steroids, which may be subject to transport (efflux) by pgp-transporters. Results may differ somewhat for drugs that are not actively transported.

So, where do you start if you have your own drug candidates to consider:

In order to calculate how your molecule lies on the egg plot, you can either 1) define your molecule graphically on the SwissADME website, or 2) you can find your drug molecule on PubChem. If the drug can be found by the PubChem search, scroll down though the available information and locate the "Canonical Smiles" section.

The SMILES is a string of characters that define the molecule. Copy the string to your clipboard and paste it into the "Smiles" box on the SwissADME website. If you wish, add a space and give the name of the molecule and the calculations will name the molecule. The website will then calculate the molecular properties of the substance and display an egg-plot.

More polar, less lipophilic molecules (less leaky though the endothelial cell barrier to the vasculature) are the most suitable for local delivery to the cochlea.

It is paradoxical that dexamethasone has properties that allow it to be rapidly eliminated from perilymph, even though in cases of sudden hearing loss we would like to be able to distribute dexamethasone throughput the ear. Calculations show that it is unlikely that therapeutic concentrations of dexamethasone reach the apical half of the human cochlea. In contrast, gentamicin was given to only suppress vestibular function. Even though it was toxic to cochlear hair cells, damage to auditory function was an unwanted side effect of the therapy. But gentamicin is retained well in perilymph and would be expected to distribute to apical regions. The limited distribution of gentamicin along the cochlea with a single intratympanic application only occurred because gentamicin was lost rapidly from the middle ear, so concentration fell before a toxic concentration could spread along the cochlea. In one study (Schoendorf et al., 2001) a sustained concentration of gentamicin was given over a period of days to the middle ear of patients through an indwelling catheter. Of 11 patients treated, 8 “became deaf on the treated side”. That is completely deaf, all hearing thresholds > 120 dB. This study is of high scientific importance as it confirms that in humans, a locally-applied drug (gentamicin) was indeed became distributed to all regions of the cochlea.