When perilymph is collected from the ear, we typically have a very small volume (0.5 – 5uL) held in a microcapillary tube. An immediate measurement of the sample length provides an accurate measure of volume. With time, volume will slowly shrink as water evaporates from the open end of the capillary. The total drug content in the capillary will remain unchanged.

The question is – how do we best handle such samples to measure perilymph drug levels by HPLC or spectrophotometer?

We have seen a number of methods in use by different groups:

1) “Spray”ing the sample into the vial. In this procedure a pulse of pressure is applied to the back of the pipette (by mouth or by syringe) so that the sample is rapidly ejected into the vial. There it dries on the surface. When received by the analysis lab, a specific volume of dilutent will be added to the vial and concentration measured. This technique is often encouraged by the lab so that they can control the dilution and keep it similar to their calibration standards.

2) “Touch Vial”. In this case the tip of the capillary is placed in contact with the vial wall and gentle pressure is applied to expel the droplet onto the vial wall. Similarly, the droplet will evaporate and dilutent will be added to the vial by the lab performing the analysis. Again, this type of approach may be suggested by the analysis lab for their own technical reasons.

3) “Dilutent”. Here, a dilutent is first added to the storage vial and the sample is expelled into the dilutent. Typically for HPLC the dilutent is 25 – 50 uL of 50:50 methanol:water  or 50:50 acetonitrile:water. For spectrophotometry it can be up to 150 uL of phosphate-buffered saline. Sample vials are capped with tops including a silicone sealing ring so they can be stored and shipped with minimal volume loss.

4) “Dilutent + Rinse” (also known as the Hartsock method, since he perfected it). In this procedure, the sample is first expelled into the dilutent, then the applied pressure is reduced allowing dilutent to be drawn into the pipette, before being expelled again. The rinse is repeated 2-3 times in an attempt to get all the drug out of the pipette.

For years, we have used the “Hartsock” method. We were curious if the different methods made any difference to the outcome and whether the rinsing procedure we used had any influence.  We therefore set up an experiment using solution with 20uM fluorescein as our standard. Samples of approximately 1uL in volume were taken and handled by the 4 methods. Every effort was taken to perform all the methods with the utmost care. In methods 1 & 2 (Spray and Touch Vial) 150uL of PBS was subsequently added to the vial before analysis. In addition, for the methods 1-3 (Spray, Touch Vial and Dilutent), the sample pipette was subsequently rinsed in a vial of 150uL clean dilutent, as a measure of how much drug was left in the capillary (shown as open symbols in the graph). Finally, the 1:150 dilution was replicated in a reliable manner by using a micropipette to add 20uL of fluorescein solution to 3 mL dilutent. These procedures were repeated both within the experiment and as 3 separate experiments performed on different days. Results were similar on each day and all results were pooled. No measurements were excluded from the study. In the graph below, all concentrations were normalized as a percentage of the concentration obtained by diluting with the micropipette. 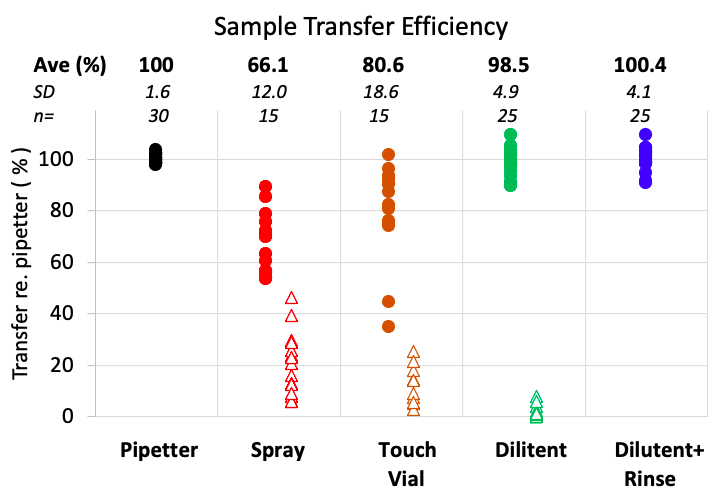 1) Spray: “Spraying” is an inefficient and highly variable method of transferring the sample from the capillary to a storage vial. On average, only 66% of the sample is recovered. Most of the missing portion remains in or on the capillary. An average of 20.4% is obtained by rinsing the pipette. The balance is probably lost as “mist”. The size of the storage vial used can play a role in the variability of this method, especially when the sprayed sample higher up on the vial wall may never be included when the dilutent is applied.

2) Touch Vial: This avoids the loss in the form of mist, but only 81% of the sample is recovered. Much, but not all, of the balance (average 12.2 %) is recovered by rinsing the capillary pipette.

3) Dilutent: In this method, 98.5% of the sample was transferred to the vial. Rinsing the pipette recovered an additional 1.5% (average).

4) Dilutent+Rinse: Using this method, an average of 100.4% of the sample was transferred to the vial, which is close to that obtained with a micropipetter

The Hartsock method is clearly a superior way to transfer samples to shipping vials for analysis. There is no need to include a correction for sample loss in handling. The “Spray” and “Touch Vial” methods both require substantial corrections for losses and will add considerable variation to the measurements. Even though the analysis lab may insist on/encourage methods that do not use dilutent, they need to know that it is a terrible way to handle perilymph samples and will cause massive problems with the data.