Barriers of the Ear

The inner ear is relatively inaccessible, deep within the temporal bone of the skull. The bony capsule provides a major barrier but there are many other barriers that restrict how substances get into or out of the ear. 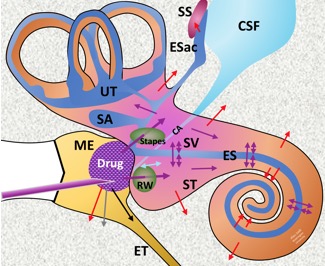 Schematic of drug delivery to the ear.

1) Tissues with Tight Junctions Tight junctions between cells are essential to stop substances passing by extracellular pathways. Those tissues that have tight junctions (cells bounding endolymph, endothelial cells of the vasculature, cells of the middle ear epithelium) restrict solute movements. Importantly, structures in the ear which may look like boundaries when seen histologically but which do NOT have tight junctions (basilar membrane, spiral ligament, collagenous layers of the round window membrane and annular ligament of the stapes) do not restrict solute movements to the same degree. The main boundaries lie at the tissues with tight junctions.

Schematic of the blood-perilymph barrier

The BLB has two components, the blood-perilymph barrier illustrated above and the blood-strial barrier, formed by the capillary vessels within stria vascularis. The BLB forms a tight boundary between the vasculature and the inner ear, comparable to the blood-brain barrier.

3) The Round Window Membrane

The round window membrane is the thin, translucent boundary between the middle ear and the base of scala tympani. Substances can pass through it but are restricted by the overlying middle ear epithelium with tight junctions that covers the structure. Treatments that damage or disrupt the membranous boundaries of this cell layer (dehydration, benzyl alcohol, saponin) can allow drugs to penetrate more readily.

Recent studies have found that the stapes is almost as permeable to most drugs as the round window. Some substances (e.g. gadolinium; a contrast agent for MRI) enter more readily at the stapes than at the round window. This is because the main barrier to drug entry is the overlying middle ear epithelium, not the cartilaginous annulus most visible by histology.

5) Areas where the bony otic capsule is thin (in rodents)

The cochlear aqueduct connects cerebrospinal fluid with perilymph of scala tympani, entering at the base close to the round window. The perilymph-CSF communication adds to the complexity of quantifying drug entry through the round window. In guinea pigs, there is a very small sustained influx of CSF in the normal state, at about 30 nL/min. This causes dilution of drug at the base of scala tympani and helps drugs spread apically faster than is calculated by diffusion alone. There is also a superimposed oscillation of fluid across the aqueduct, driven by the CSF pressure changes associated with respiration. The oscillation is approximately 3 nL/s. This also adds to the dilution of drug in the basal turn of scala tympani and causes drug loss to CSF.

Perforation of any part of the otic capsule release intracochlear pressure and allows a rapid entry of CSF (sometimes exceeding 1 uL/min) which washes through the perilymph spaces from the aqueduct to the site of perforation. This causes rapid washout of drugs from perilymph. There are many published studies in the literature in which studies of perilymph were compromised by a failure to recognise the disruptive influence of CSF flow through the ear after it was perforated.

7) The endolymphatic duct and sac

The endolymphatic sac is mostly encased in bone (the intraosseous portion) but has boundaries in contact with the dura and with the sigmoid sinus. The degree of communication between endolymph and CSF and endolymph and the vasculature at these sites is unknown.

There are some studies showing that drugs applied to the inner ear may distribute to tissues of the brain via neural pathways. Thes studies raise some concerns that locally-applied drugs intended to treat the ear may also reach the brain in low concentrations, passing either to CSF via the cochlear aqueduct, or through neural pathways.

A paper on this topic was published as Salt & Hirose, Communication pathways to and from the inner ear and their contributions to drug delivery. Hear Res. 2018  362:25-37