For the eye, Anti-VEGF therapies have become a mainstay of their field and have replaced surgical procedures for a number of eye problems including wet age-related macular degeneration (AMD). Many other local therapies for the eye are now building on this success.

Gentamicin is probably the closest our field has come to a mainstay procedure, but it’s use as a local therapy for the ear has been declining. Gentamicin was the first intratympanically-applied drug to gain popularity in the USA in the mid 1990’s after years of study in Germany (Lange, 1981). Gentamicin is effective at reducing vertigo in patients with Meniere’s disease, which it does by ablating (i.e. reducing the number of) vestibular hair cells. For the patient, this makes the balance system less sensitive and reduces the severity of their vertigo attacks.

Unfortunately, gentamicin can also damage the hair cells responsible for hearing. And here we have Disaster #1 in that hearing losses caused by gentamicin therapy have been grossly exaggerated over the years. The AAO-HNS guidelines for reporting treatment results in Meniere’s (Pearson & Brachmann, 1985) stated that “a loss of hearing in the PTA (4 frequency pure tone average; 0.5, 1, 2, 3 kHz) >10 dB and/or a 15% PB discrimination score (speech discrimination with standardized word lists) is reported as a hearing loss”. While at first the attribution of hearing losses of >10 dB to the toxicity of gentamicin may seem reasonable, consider the following data sets from two of the published lower-dose clinical studies with locally-applied gentamicin.

Each symbol on the plots is the hearing change experienced by an individual patient. Positive numbers are hearing losses, negative numbers are hearing improvements. There is a wide range of values, with some losses of 50 dB, but hearing also improved by 50 dB for others. The average hearing changes across all the patients for both studies are very close to zero. This is not a result you would expect if gentamicin was systematically damaging hearing, or even just damaging hearing in a proportion of the patients. If gentamicin was causing hearing loss, the mean hearing change for the group should be positive. But for these data, following AAO-HNS guidelines, it would be reported that 8 of 28 (31%) patients in the Hirsch & Kammerer study and 11 of 24 (32%) of patients in the Minor study experienced hearing loss (values above +10). So, it gets reported that over 30% of patients were deafened by gentamicin, while the average hearing loss of the group is close to zero! The fact that approximately equal numbers had substantial improvements in their hearing (which cannot be explained by the effects of gentamicin) is then ignored. Such hearing fluctuations are, of course, dominated by the large cyclical changes of hearing that Meniere’s patients undergo. If you were to take any group of Meniere's patients and measure hearing changes over a comparable interval, you would see cyclical changes. Fluctuating hearing loss is a well-documented characteristic of the disease. The hearing changes reported in these studies cannot be the result of gentamicin toxicity to hearing and the hearing losses reported under the AAO-HNS guidelines give a totally misleading, exaggerated indication of gentamicin-induced hearing loss. As a result of this misrepresentation of the data, gentamicin use has declined.

It is unfortunate, as paradoxically, gentamicin has molecular properties that make it a good candidate for local delivery to the cochlea. 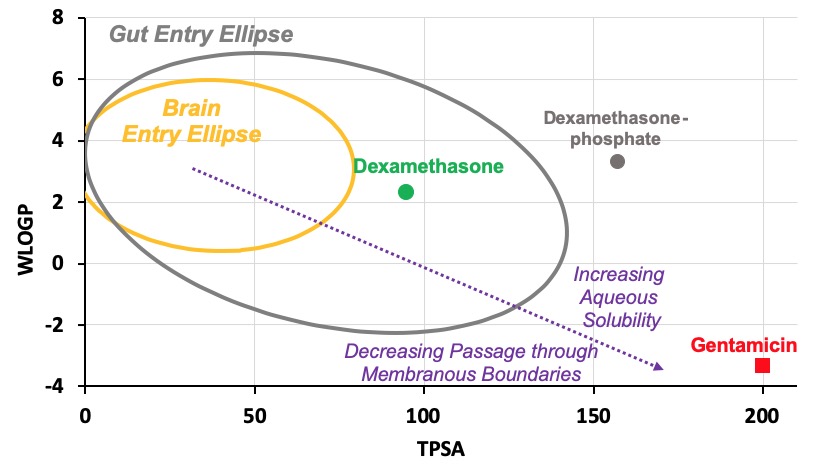 On the egg-plot, gentamicin is hydrophilic (low WLOGP), has many polar groups (high TPSA) and lies well outside the gut entry ellipse (gray). This explains why for systemic indications, gentamicin is given intravenously as it would be taken up poorly by the gut with oral administration.

For the cochlea, these physical properties mean that relative to other drugs, gentamicin is retained in perilymph well and therefore can distribute along the cochlea, reaching apical regions in appreciable concentrations. 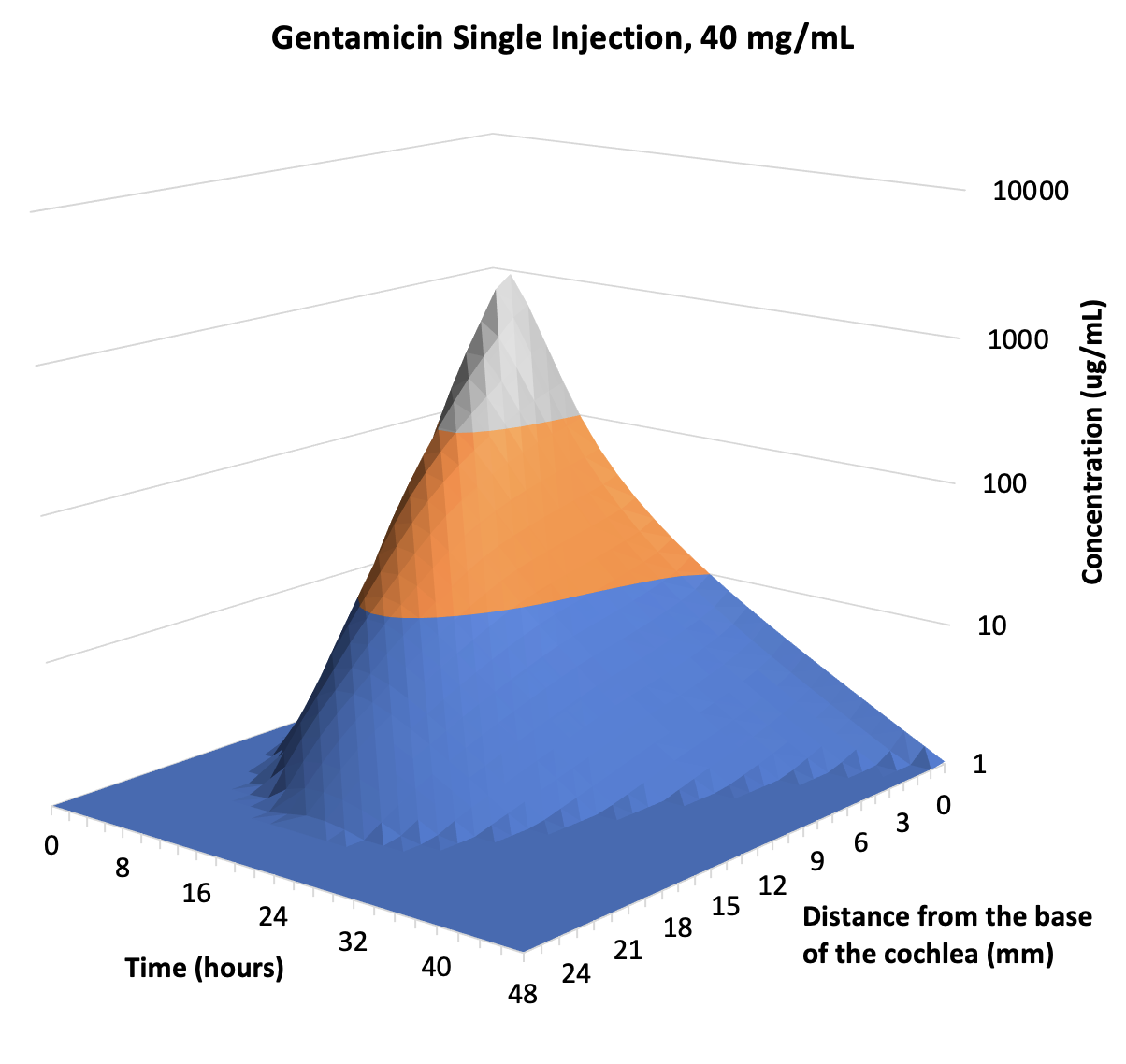 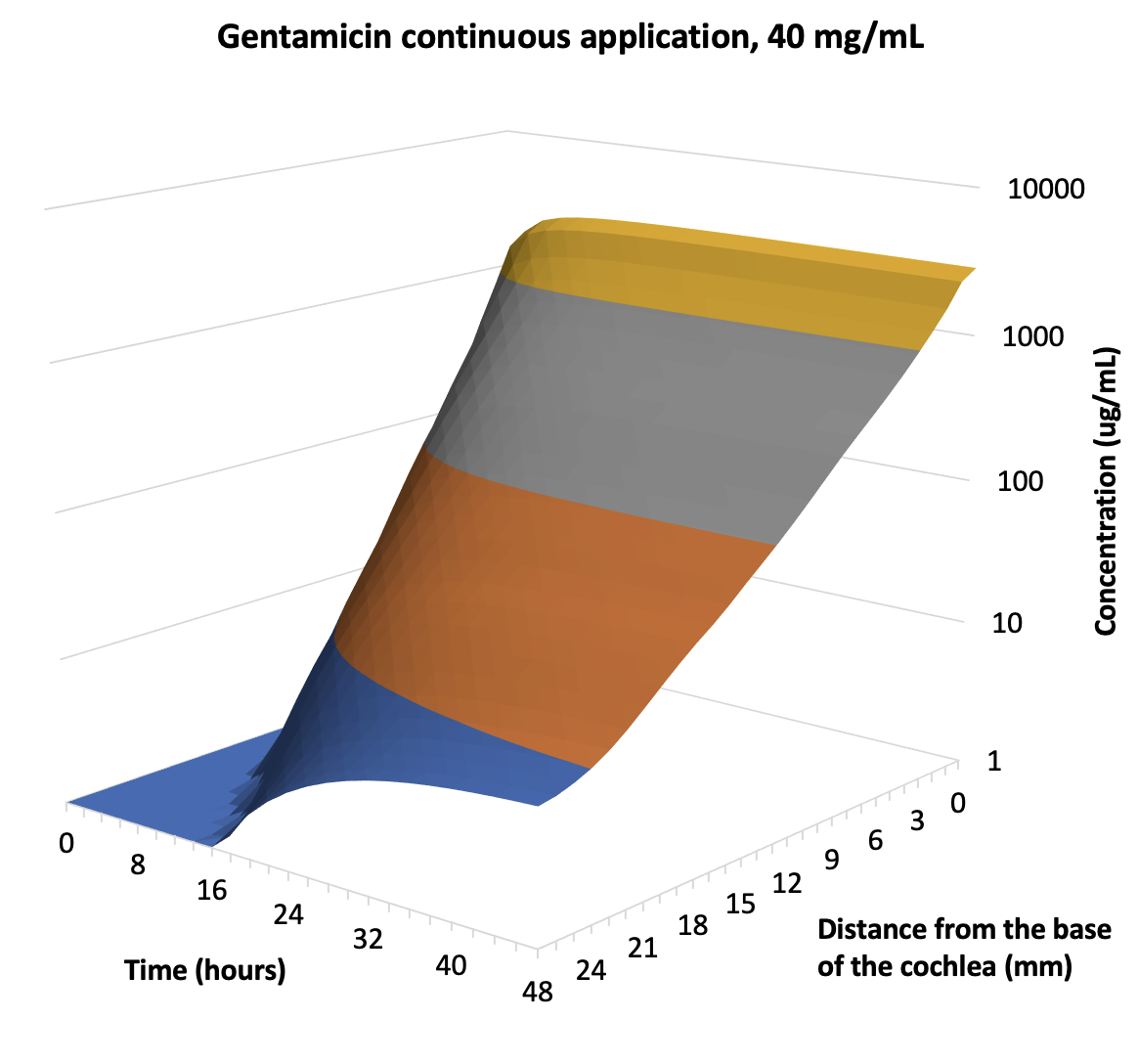 The 3D plots above are the calculated distributions of gentamicin along the human cochlea, based on PK studies performed in animals (Salt et al., 2016). For single injections separated by more than 48 hours, distribution towards the apex is limited, explaining why cochlear locations to speech frequencies (0.5-3 kHz; i.e. distances ~ 10 – 20 mm from the base) may not be affected. In contrast, with sustained applications apical concentration rises progressively over the first 48 hours. There is still a basal-apical concentration gradient of more than 100-fold. The prediction that gentamicin does reach apical regions when given as a sustained delivery is consistent with one study in which a sustained concentration of gentamicin was given over a period of days to the middle ear of patients through an indwelling catheter (Schoendorf et al., 2001). Of 11 patients treated, 8 “became deaf on the treated side”, i.e. completely deaf, all hearing thresholds > 120 dB, a disaster for the patients involved. This is probably the only study in the literature which confirms experimentally in humans that an intratympanically-applied pharmaceutical can become distributed to all regions along the length of the living cochlea. Unfortunately though, this is not something we want to be doing with gentamicin.

The most common local inner therapy nowadays is to give dexamethasone intratympanically, but in it’s water-soluble form as 4 mg/mL dexamethasone phosphate (Dex-P). Dex-P has PK and molecular properties that make it almost useless (Disaster #2) for therapy of the speech regions of the human cochlea, as discussed extensively here. In brief, it enters the inner ear slowly (due to the polar properties of the added phosphate group). Once in perilymph, it is rapidly metabolized to dexamethasone, the more-leaky form that rapidly leaks out to the vasculature. As a result it does not distribute apically vary far along the scala. At best, intratympanic Dex-P provides a brief (< 6hr) exposure of the basal part of the cochlea and the vestibular system to dexamethasone. In a Cochrane review of outcomes following intratympanic Dex-P therapy (Plontke et al., 2009; revised 2022) one of the conclusions was "For primary therapy, intratympanic corticosteroids may have little or no effect compared with systemic corticosteroids".

Due to the lack of efficacy of the 4 mg/mL Dex-P dosing for patients with sudden hearing loss, some groups have tried a higher-dosing option, giving up to 1 mL of Dex-P at a concentration of 24 mg/mL intratympanically (Alexander et al., 2008). What is interesting is that systemic Dex-P therapy for serious disorders is typically less than 20 mg/mL IV per day (Cerebral edema 10 mg; mountain sickness 2 mg; chemotherapy-induced nausea 12-20 mg; Shock 1-6 mg; Inflammation 0.75 – 9 mg; multiple myeloma up to 40 mg; multiple sclerosis 30 mg; immunosuppression 0.75-9 mg; intracranial tumors 2 mg; severe allergic reactions 4-8 mg; ). The dose being given intratympanically (up to 24 mg) is among the highest daily doses delivered systemically, yet the possibility that it primarily exerts its effect on the ear through the vasculature, equivalent to a systemic delivery, is not considered.

The good news is that Dex-P therapy is considered relatively safe (even if for cochlear therapy it turns out to be a placebo procedure). This is probably why it has become an "illegitimate mainstay" of the field.

For a number of years, researchers at Otonomy were working with a dexamethasone formulation specifically for intratympanic applications. Native dexamethasone is relatively insoluble in water (~94 ug/mL) so in this formulation it was given as a suspension of solid drug in polaxamer gel. Studies in animals showed that perilymph dexamethasone levels could be maintained for over 28 days with the formulation, which was eventually named Otividex. Otividex went through clinical trials as a therapy for Meniere’s disease. In a press release dated May 2021 Otonomy stated “In February 2021, Otonomy announced the results of a third Phase 3 trial for OTIVIDEX in Ménière’s disease. This trial failed to achieve its primary endpoint, which is based on the intent-to-treat population (p value = 0.312). The trial did achieve statistical significance for the per protocol population (p value = 0.031). Based on a comprehensive analysis of the results, Otonomy has decided not to pursue additional development of the product candidate.” (my emphasis added).

This was truly a mega-disaster (Disaster #3) for the inner ear drug delivery field. The PK studies showed that a Dex suspension was a far better way to deliver dexamethasone to the ear (far, far better than Dex-P). If Otividex had been approved for the treatment of Meniere’s, it would have quickly been picked up as a superior choice for treating sudden hearing loss and a variety of other ear disorders. With support by Otonomy for the product withdrawn, but with Otonomy holding the patents for the product, it is unlikely that any other company will take the product further. This essentially “locks it up” so that no one else can use it, which is why I regard it as an epic disaster. 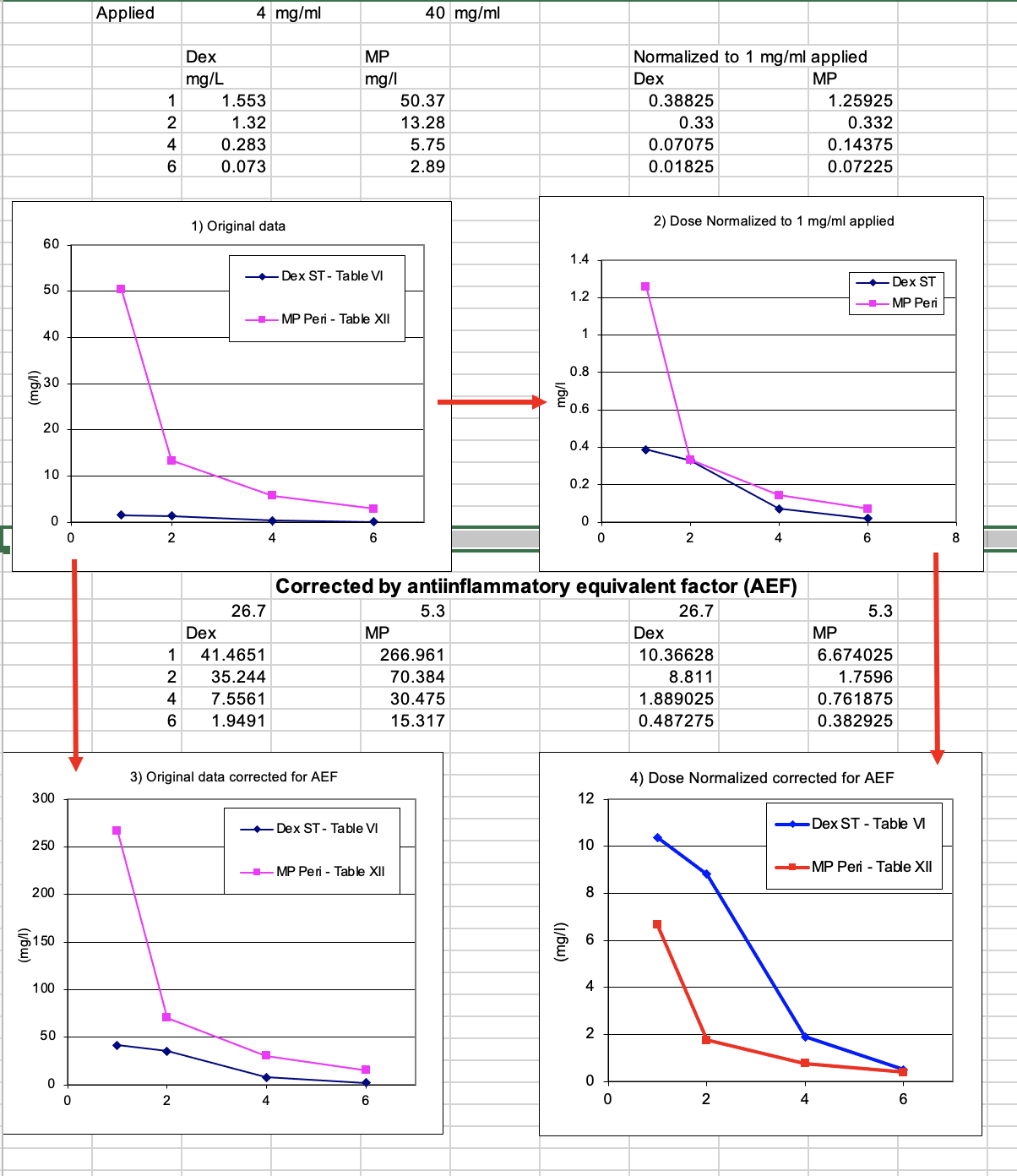 Our current understanding of local inner ear drug therapy is primitive. Very primitive. Although I am optimistic that some therapies will eventually become our mainstay procedures, we are far from that point. We have gentamicin therapy, which is effective, but is not being used clinically because it might cause hearing loss, when it probably doesn't. We have Dex-P therapy which has horrible kinetics for the cochlea and for auditory disorders is probably a placebo therapy. The more promising use of a gel-based dexamethasone suspension which provided long exposure times to the drug, which was backed by solid scientific studies, has been abandoned and locked away. And methylprednisolone is essentially a faith-based therapy.

We must be able to do better than this.