Size of the Ear and Drug Diffusion

The inner ear is small in humans, tiny in guinea pigs and monkeys, and minuscule in mice. The 3D images below were generated by TSLIM (thin-sheet laser imaging microscopy) imaging of the ear. The volumes and lengths of some of the compartments derived from analysis of the images are seen in the table below.

You would think that being so small, a drug applied to one part would rapidly spread throughout the whole structure. But this is not the case. As the ear is structured as a spiral tube with bony walls (the walls are not shown in these images) the drug has to spread along the spiral tube.

So, when it comes to drug distribution in the ear the length of the spirallly-wound tubes is of prime importance. This is because the fluids in the ear are not moving (no flow) so that drug movement along the ear is dominated by diffusion. Diffusion is very fast over short distances, but becomes very slow over the distances involved along the length of cochlear spirals. 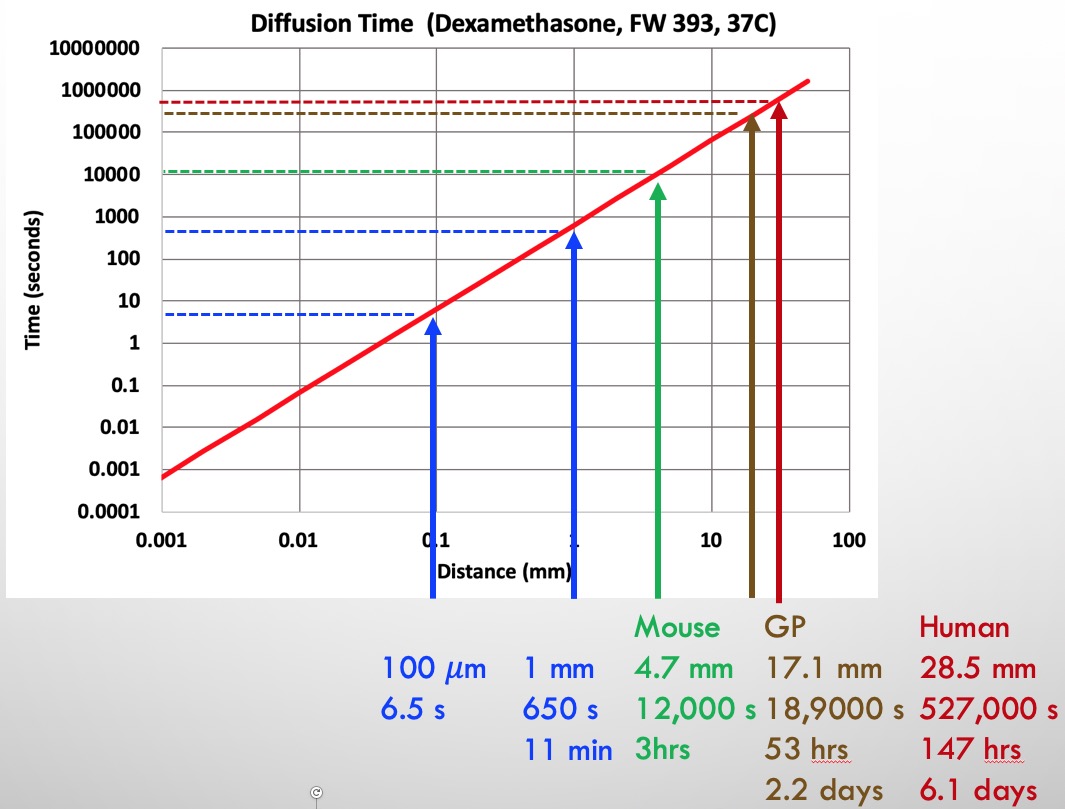 It takes 3 Hours to diffuse along the 4.7 mm length of the mouse cochlea.

It takes 2 Days to diffuse along the 17.1 mm length of the guinea pig cochlea.

It takes 6 Days to diffuse along the 28.5 mm length of the human cochlea.

This is why drugs applied intratympanically often do not reach apical cochlear regions.

The situation gets more complex when some drug is being lost from the tube as it diffuses, a process called elimination.

The above picture shows scala tympani of the human cochlea "unrolled". The approximate regions coding different sound frequencies are marked. When drug is applied to the middle ear (intratympanically) it enters scala tympani through the round window membrane, shown green at the left of the picture. All drugs are lost from perilymph to some degree, primarily by elimination to the vasculature. If the drug is lost rapidly, as many are, it may never reach the apical, low-frequency regions of the cochlea. This means that some drugs applied intratympanically do not reach the parts of the ear they are intended to treat.