There is a common misconception that drug solutions applied intratympanically (into the middle ear cavity) “stay around for a while”, giving time for the applied drug to spread into the inner ear. Some even think that delivery in this manner is relatively efficient, allowing most of the applied drug to enter inner ear perilymph over time. 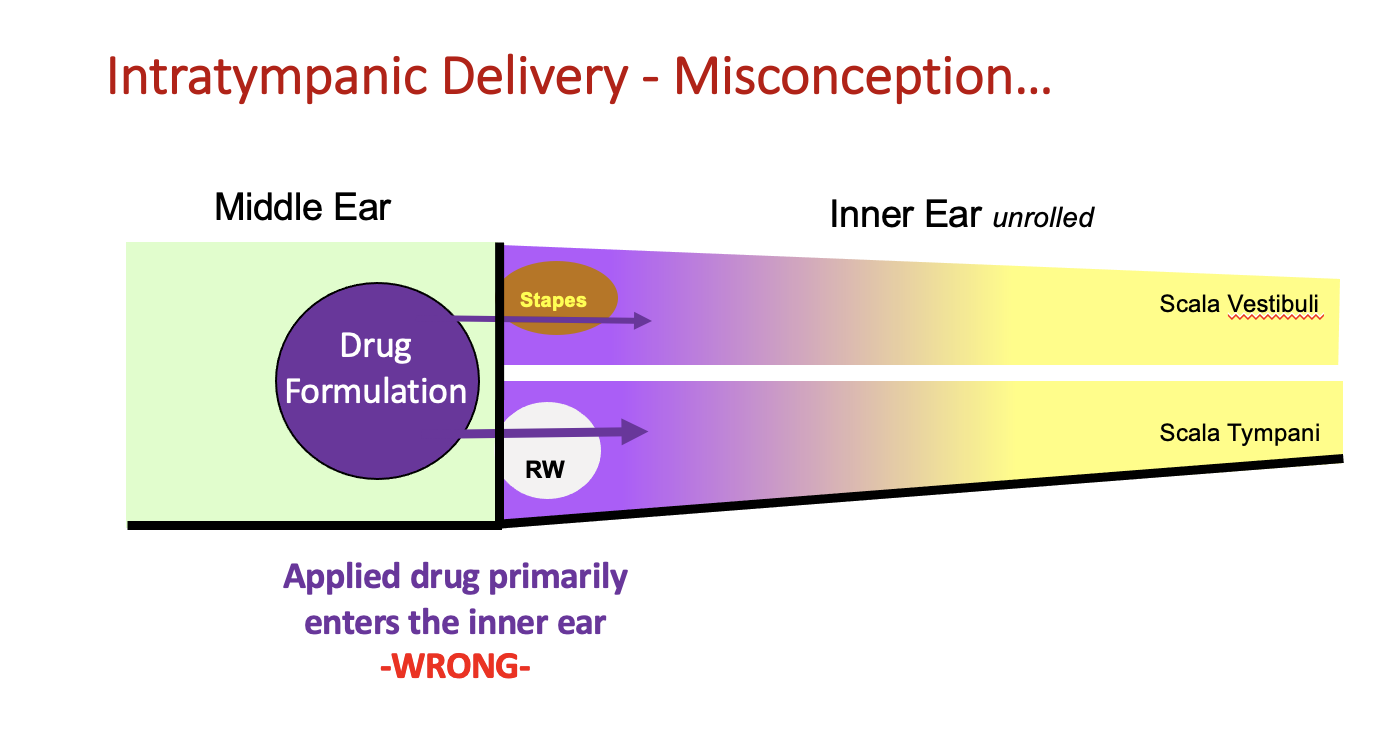 Unfortunately, it’s not true. The middle ear delivery process is neither efficient or simple.

The middle ear is specialized to maintain its gas-filled state and has powerful homeostatic processes to remove fluids and foreign substances. The cells of its ventral surface are ciliated i.e. have long motile cilia which can push fluid along their surface. Especially when the patient or animal is conscious and upright, the cilia propel fluid volume towards the Eustachian tube. Each time the subject swallows, the tensor tympani muscle attached to the tympanic membrane contracts, pulling the tympanic membrane inwards, pressurizing the middle ear space and driving fluid down the Eustachian tube. As the tensor tympani relaxes, air from the pharynx is drawn back into the middle ear, replacing the expelled fluid with air. Over time the applied drug formulation is driven out of the middle ear to the pharynx and from there it is swallowed.

Even when the subject is anesthetized and supine, with no volume losses down the Eustachian tube, there are additional highly active processes that remove foreign substances.

Lim & Hussl (1975) described active pinocytosis of macromolecules by the bounding epithelium, delivering substances to the lymphatic system for drainage. Such a mechanism is consistent with the rapid loss of drug from solution in the middle ear in a non-specific manner (all drugs are lost at a similarly high rate). Drugs lost to the lymphatics eventually enter the vasculature at a nearby lymph node. Some of the middle ear drug loss also occurs directly to the vasculature.

The figure below shows the time course of loss for some drugs from the anesthetized guinea pig middle ear (i.e. with no fluid loss to the Eustachian tube). It was quantified by taking samples from the round window niche at the time of perilymph sampling. Loss is relatively non-substance-specific. Even large molecules, such as dextran, rapidly decline in concentration after local applications in the form of a solution. Such a non-specific process is consistent with loss by pinocytosis.

The rate of elimination from the middle ear has a major influence on perilymph drug levels reached. Shown below is a calculation for gentamicin entry into perilymph by FluidSim using parameters appropriate for gentamicin. The normal middle ear elimination (MEE) half time is about 75 min (from the studies above). In the calculations we have changed elimination half-times by a factor of 2, higher and lower, altering the rate of decline as a function of time. Persistence time in the middle ear has an enormous influence on perilymph concentration, with a higher, later peak when elimination occurs more slowly (blue curves). All other calculation parameters were unchanged across the 3 conditions. Differences in perilymph concentration, time course and distribution along the cochlea (not shown) are a direct result of the different middle ear kinetics. 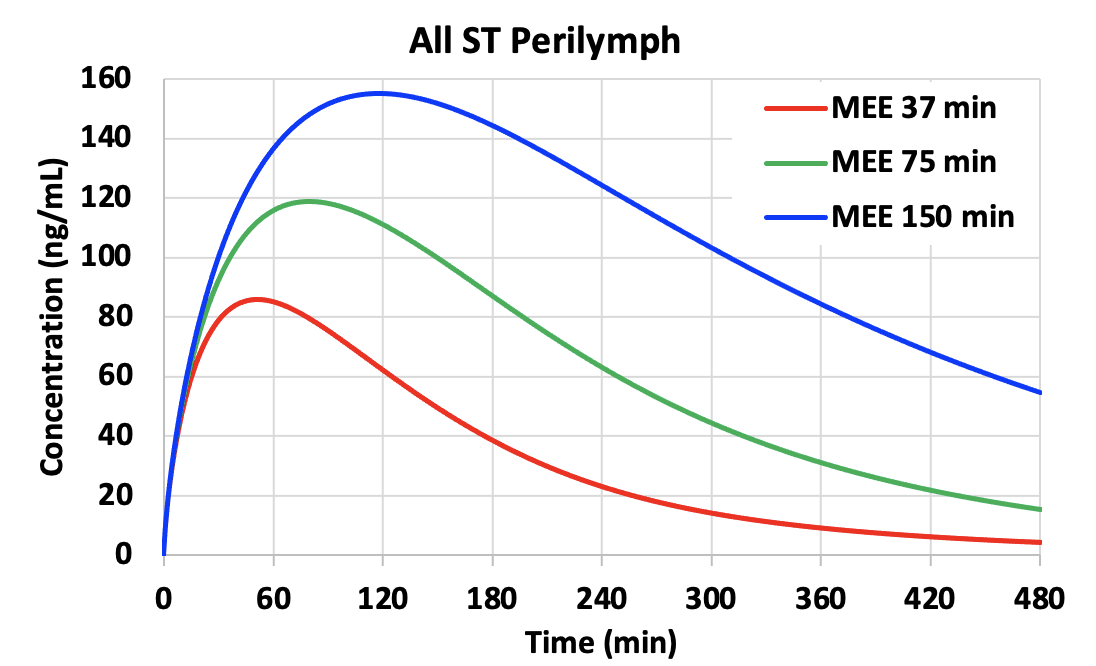 A longer persistence of drug concentration may be provided by delivering drug as an undissolved suspension (which dissolves slowly over time) or as a timed release formulation from a substrate (polymers, particles, etc).

Delivering the drug in a gel formulation (Poloxamer 407, hyaluronate, etc) does NOT slow the rate of decline appreciably. Gels do not act as timed-release agents. They may slow volume loss to the Eustachian tube, but they do not prevent losses to the lymphatic and vascular systems. Delivering the drug in a gel does not solve the problem. Also note that although the gel may remain in the middle ear for a few days, this does not mean that drug is also present in the gel. The drug rapidly diffuses out leaving a no-drug gel behind. Kinetics of the drug and the gel are governed by completely different kinetic processes. The presence of gel in the middle ear gives no indication of the amount of drug present.

Especially when comparing across species, similar kinetics of the middle ear cannot be assumed. In one study where the kinetics of two drugs were compared in guinea pigs and humans, it was found that CHIR99021 was lost from the middle ear guinea pigs with a 56.4 min halftime while VPA was lost with a 48.6 min halftime (McLean et al.,.2021). These rates are close to those found for other drugs, as shown in the plots above. Comparable measurements with samples from the human middle ear found that the losses were even faster, with halftimes of 10.6 min (CHIR99021) and 8.9 min (VPA) respectively fitting the measurements. This is probably a consequence of the highly aerated mastoid in the human, with higher surface area to volume ratio than found in the simple, open bulla of the guinea pig. Nevertheless, in cases where kinetics of the middle ear are substantially different, the difference will certainly have a major influence on perilymph levels achieved.

Unfortunately, the lack of awareness of how powerful the homeostatic processes of the middle ear really are has resulted in very few measurements of middle ear kinetics. They are likely to be affected by many factors, such as the drug volume applied, the orientation of the head, whether the subject is conscious or anesthetized, and the presence of other components in the applied formulation. There are no detailed studies in which the most important variables have been identified and quantified.