Pigmented guinea pigs have proven to be a very valuable species for pharmacokinetic studies of the inner ear. The cochlea of the guinea pig is highly coiled, 4½ turns, (as shown in the above 3D reconstruction) making it relatively long. Unlike mice and rats, the fluid chambers of the guinea pig ear are long enough to demonstrate and measure drug gradients generated following local drug applications. Drug gradients along the ear are important because they are likely to occur to an even greater extent in the human ear (28 mm long compared to 17 mm in guinea pigs). Cochlear length in the guinea pig is also similar to that of some primates, such as the cynomolgus monkey (macaque). Most of the publications of inner ear fluid physiology and drug pharmacokinetics have used this strain of guinea pigs.

In many publications, the animals have been characterized as “pigmented NIH-strain”. Over the years this nomenclature has become increasingly meaningless as NIH is no longer an available source of the animals. About 40 years ago the National Cancer Institute (NCI) at the National Institutes of Health (NIH) did maintain such a colony. The NCI did not sell or provide young guinea pigs for experiments, but they would provide mature breeders without charge to establish or supplement existing colonies at other institutions. The animals differ in characteristics from other pigmented strains, such as tricolor.

The current colony of pigmented animals was already established when Dr Salt joined Washington University in 1984. There, they maintained a colony for the use of Drs Thalmann and Marcus. Guinea pigs were produced by “harem breeding”, in which the animals were housed in large tubs containing one male and up to 6 females. Mating records were maintained as 5x7 index cards documenting each animal. Production from the Washington University colony typically followed “feast” or “famine” cycles. At a time of “famine” (insufficient animals for experiments), new breeders would be selected using the lineage cards. This was an extremely difficult task and many “bad decisions” occurred. Taking animals to be breeders when few animals were available also further depleted the number of animal available, making the problem worse. With new breeding tubs set up and with a delay of 3-4 months during which experiments were limited, production would increase back to required levels. The colony would then run almost mangement-free for a while – for a few years until the new batch of breeders aged. Production would again decline and start another famine cycle. During some of the early “famine” cycles, we contacted NIH and did receive additional breeding stock. On one occasion after NIH had terminated their colony, we were contacted by a commercial breeder who wanted to start their own colony. We provided them with a considerable number of mature animals to help them do this. This donation was reciprocated a few years later when we too needed help to increase our breeding stock. 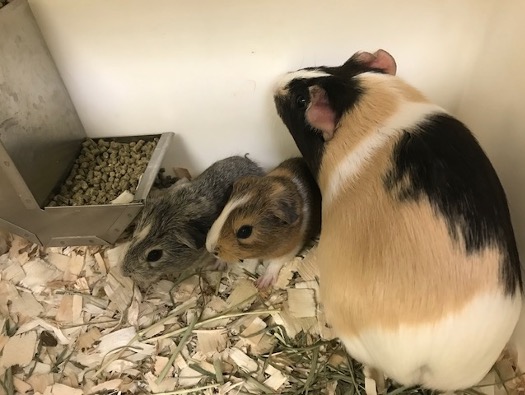 The 3-4 year cyclical nature of guinea pig production was markedly reduced when around the year 2000, Dr Salt took over the management of the colony. Up to this time the task was performed by the animal care staff. Dr Salt wrote a computer program to help, initially called “GPColony20” but more affectionately referred to as time passed as “E-Harmony for Guinea pigs”. The program could manage 10 active breeding tubs, each containing 1 male and up to 5 females. Lineage of each animal going back 4 generations was used to calculate breeding suitability scores, as shown in the “family trees” below. 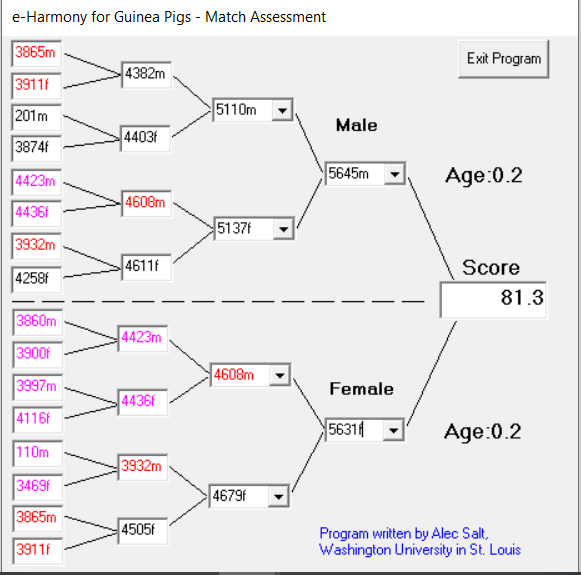 Breeding suitability scoring calculated for two examples. Common ancestors between the animal pair are shown red. At the left, the pair has common “great-grandparents”, scoring the value 12.5. At the right the female’s father is also the father of the male’s mother. With additional other common ancestors this resulted in a score of 81.3 for this pair. The pair would not be bred together.

Using the program, even with a small colony of 40-50 animals, we were able to breed pairs with scores typically below 25, maximizing genetic diversity of the colony.

The program also performed many other functions, tracking time between litters, productivity (number of live pups over the prior 6 month period) and the age of each breeder. The figure below shows the pups generated by each male and female over the prior 6 month period. The animals flagged as orange text are those aged over 3 years, for which replacement needs to be considered. Colony management by this computer program, especially age-tracking, has completely eliminated the previous feast/famine cycles of production. Management is now straightforward and proceeds continuously.

In the 1980’s the guinea pigs were fed a diet consisting of commercial guinea-pig chow, with kale given weekly. In the 1990’s, as part of a new management practice, the weekly kale was deemed unnecessary and was discontinued. Over the following months we experienced a sharp increase in the number of stillborns and other pup deaths. Twice-weekly kale was restored and has been given ever since. Animals are also regularly given Timothy Hay. The excitement the animals exhibit (whistles and whoops) as kale or hay are distributed to the tubs is the best evidence for how the guinea pigs appreciate this part of their diet.

In 2020, we were forced to dramatically reduce guinea pig production due to the Covid-required shutdown of animal facilities. As a solution, we separated 50% of the females from their males for a period of months. As lab work later resumed, we slowly reintroduced the females to the breeding tubs a few at a time. The slow reintroduction rate was based on computer model predictions and was designed to prevent a huge “pulse” of production that would have occurred if all the females were reintroduced at once.

Over the past 20 years, the Salt colony has been a reliable source of healthy animals. There have been no middle ear infections and animals have shown consistent, normal hearing sensitivity (i.e. no apparent deafness genes). There have also been relatively few health problems of the breeders themselves.

This year, the colony has been moved to a new facility at Turner Scientific, Illinois. To help manage the colony in its new home an improved version of the management program (E-Harmony for Guinea Pigs 2) was written.

The new program makes breeder selection even easier and more objective. Scores are calculated based on both breeding suitability and genetic lineage of the individual (trying to balance the representation of different lineages in the colony). In the graphic below, pups from all females in the colony (red numbers) are screened for suitability with a specific male. The highest scores are displayed, ranked in order. If a suitable pup is available, it is shown in green. In this case, a substantially better score would be achieved with a female pup from Sow 5858f. A “pup watch” is then set up in the program to notify the care staff when the desired pup becomes available. 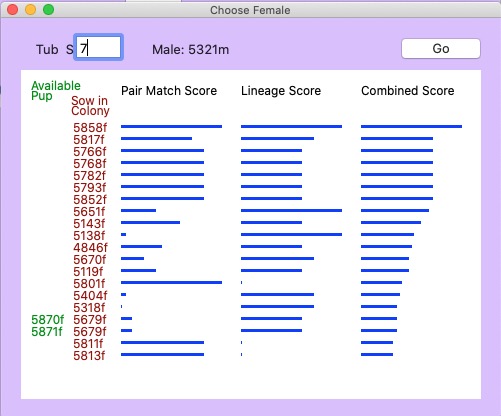 With the combination of good management practices and careful animal husbandry, we are planning to maintain a healthy colony of Pigmented Salt-Strain Guinea Pigs for future use.