Dexamethasone-phosphate is Almost Useless for Treating Some Inner Ear Disorders

If you experience sudden hearing loss, or suffer from Meniere’s disease, your ENT doctor may suggest treatment with an intratympanic injection of dexamethasone (i.e. a dexamethasone solution injected into the middle ear space through the eardrum). The procedure is relatively safe and painless, performed without general anesthesia as an office procedure. The actual drug typically used is dexamethasone-phosphate (DexP), a water-soluble form of the drug. Intratympanically-applied DexP is very widely used and has become the most common procedure for local delivery of drug to the inner ear. It can be regarded as the “mainstay” of the local inner ear drug delivery field.

The problem is that dexamethasone-phosphate has pharmacokinetic properties that make it almost useless for the therapy of some inner ear disorders.

Within the ear, DexP is quickly metabolized to Dex by phosphatases present in the fluids. Dex is the smaller, less-polar form of the drug which readily passes through biological barriers. As a result, it is rapidly lost from perilymph to the vasculature, with a half-time of less than 40 min.

In summary, DexP leaks rapidly from the middle ear, enters perilymph slowly through the round window, where it is quickly metabolized to dexamethasone, which rapidly leaks out to the bloodstream (Salt et al., 2018).

The time courses in different regions of the guinea-pig ear resulting from these kinetic properties are shown in Figure 1. A therapeutic dose (about 0.04 ug/mL) is only present for about 8 hours. 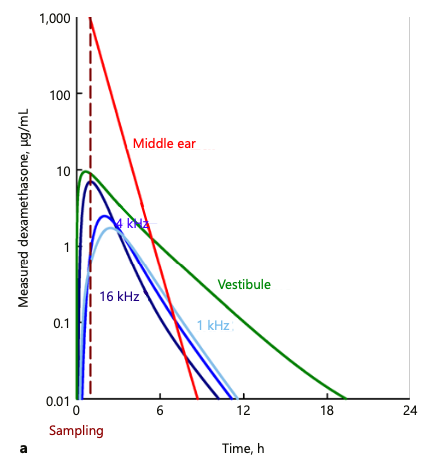 Figure 1: Time courses of dexamethasone in different regions of the guinea pig inner ear derived by fitting fluid sample data collected 60 min after application. The ear is exposed to a therapeutic Dex concentration (above 0.04 ug/ml) for about 8 hours. (from Salt et al., 2018)

The situation is even more dire in humans, where the cochlea is almost twice the length, as shown in Figure 2. Dex is retained better in the vestibule and scala vestibuli than it is in scala tympani providing a therapeutic dose there for over 24 hours. This may provide an appropriate therapy for balance disorders, such as the vertigo in Meniere’s disease. Nevertheless, it is unlikely to be effective against disorders affecting the entire cochlea, such as sudden hearing loss when all frequencies are affected. Locally-applied DexP is not a good therapy for the speech frequency regions of the cochlea, especially the lower frequency apical regions. 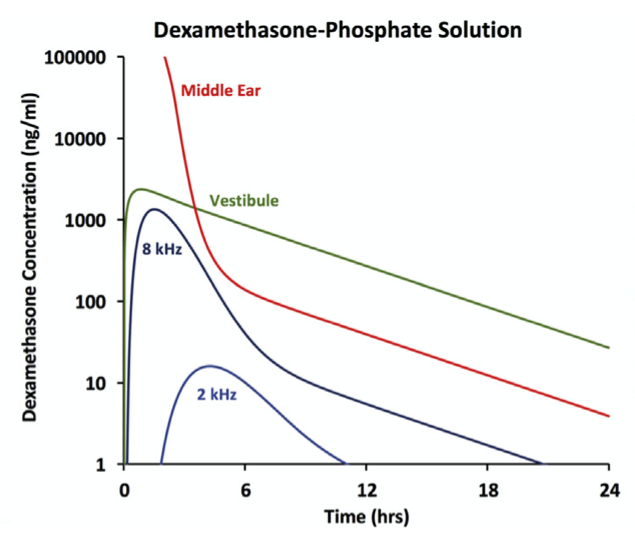 Figure 2: Calculated time courses of dexamethasone in different regions of the human inner ear Only the basal part of the cochlea and the vestibular system (balance) is exposed to a therapeutic Dex concentration (above 40 ng/ml) for less than 6 hours. More apical regions of the cochlea (responding to frequencies below ~2 kHz) do not receive a therapeutic concentration at all. (from Salt & Plontke, 2018)

A more sustained therapy can be achieved when the non-phosphated form of Dex  (native dexamethasone) is given as a suspension. This is the form used in Otonomy’s formulation, called Otividex (https://www.otonomy.com/pipeline/), which reached phase 3 clinical trials for the treatment of Meniere’s disease. Unfortunately, the results were disappointing and development of the drug formulation was discontinued (May 11th 2021 Press release). The lower solubility of Dex means that the concentration in the middle ear is lower than for DexP (~100 ug/mL compared to 4000 – 24000 ug/mL for DexP). This is more than offset by the prolonged concentration in the middle ear (more drug dissolves from the suspended particles as dissolved drug is lost to the vasculature) and the faster passage of this form across the round window membrane. While sustained therapeutic concentrations can be maintained in vestibular regions and in the basal (high-frequency) regions of the cochlea for days, Dex is still only treating the basal half of the cochlea. The apical half (responding to frequencies of ~2 kHz and below) probably does not receive a therapeutic concentration. This may explain why the clinical trials with Otividex in Meniere’s disease showed no improvement of auditory symptoms (hearing loss, tinnitus).

Figure 3: Calculated drug time courses in different regions of the human inner ear when dexamethasone is applied as a suspension of the native drug, rather than as DexP solution. In this way, the basal part of the cochlea and the vestibular system are exposed to a sustained therapeutic Dex concentration (above 40 ng/ml). Apical regions of the cochlea (responding to frequencies below ~2 kHz) still receive concentrations below the therapeutic level of ~40 ng/mL (from Salt & Plontke, 2018)

There are alternatives that should be considered. The steroid triamcinolone differs only slightly from dexamethasone, as shown in Figure 4, yet the difference gives a substantial improvement in properties relevant to its use in the ear. 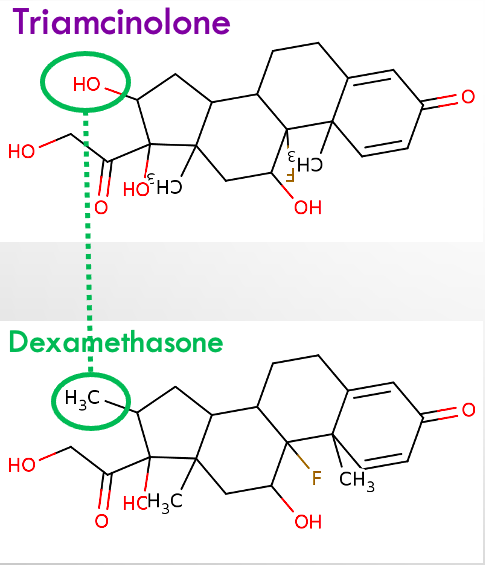 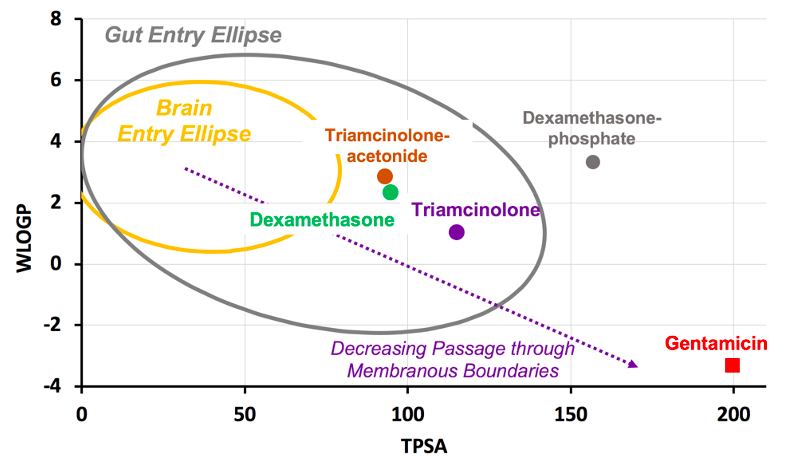 Figure 4: Triamcinolone differs only slightly from dexamethasone, in a region that does not influence binding to the glucocorticoid receptor. In the “tail” of the molecule a “non-polar”, hydrophobic CH3 group is replaced by a “polar”, hydrophilic OH group. The increase in hydrophilicity makes triamcinolone pass less easily through membranous biological boundaries, as shown in the "egg plot" at the right. In the cochlea, this means that it leaks out to the vascular system less easily. As it is better retained in perilymph, it can diffuse further along the cochlea. 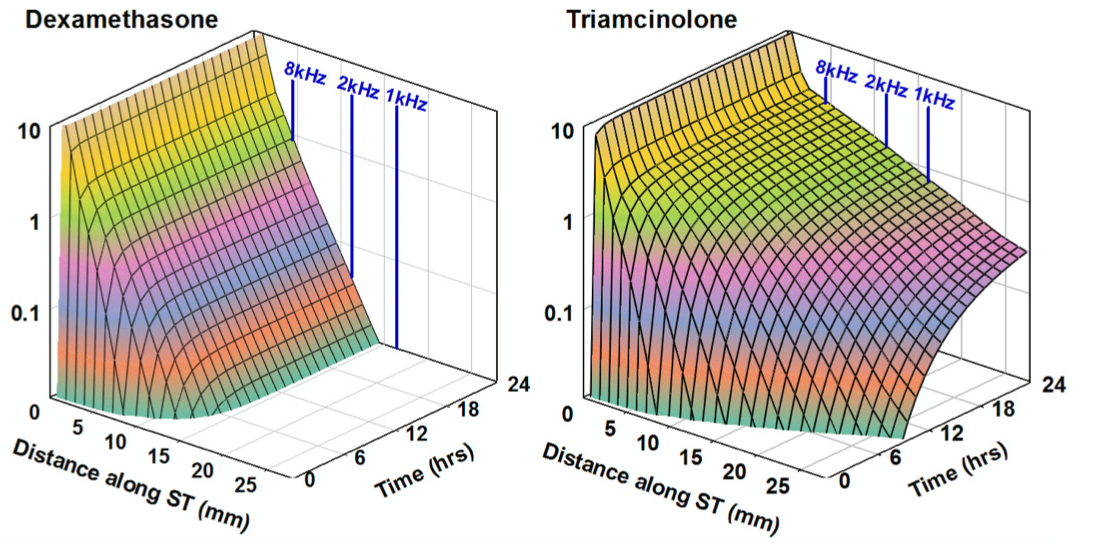 Figure 5: Demonstration that the closely related steroid triamcinolone has superior properties for local drug therapy of the inner ear of humans.  Distribution characteristics along the human cochlea are calculated based on kinetic properties measured in animals. (from Salt et al., 2019)

2) Steriods with properties that allow them to be better retained in perilymph (such as triamcinolone) are likely to be more effective as these drugs will distribute better to apical cochlear regions.

3) As we better understand how different drugs distribute in the cochlea, we appreciate that some drugs are well-suited and others are poorly-suited for cochlear therapy. We cannot keep using poorly-suited drugs when better options may be available. We need to be studying the better alternatives.

Salt AN, Hartsock JJ, Piu F, Hou J. Comparison of the pharmacokinetic properties of triamcinolone and dexamethasone for local therapy of the inner ear. Frontiers in Cellular Neuroscience 2019; 13, 347. https://www.frontiersin.org/article/10.3389/fncel.2019.00347