As humans get older their hearing sensitivity declines as the sensory “hair cells” in their ears age and die. The hair cells are not replaced. The number present at birth are there to last a lifetime. But with noise exposure and with age they are lost, slowly at first but faster and faster as we age. Hearing loss occurs primarily for high-frequency sounds, making it difficult to distinguish consonents and harder to understand speech. Until now, there have been no treatments to correct such hearing loss. Treatment options currently typically include hearing aids and in severe cases, electrical cochlear implants.

Frequency Therapeutics (who we collaborate with) have been working to develop a new drug therapy for the ear which can regenerate new, functional hair cells. It involves using a combination of two drugs in a formulation (FX322) which is injected through the eardrum, into the middle ear space. When the two drugs are given simultaneously they produce a regeneration of new sensory hair cells in damaged ears, restoring hearing sensitivity. The therapy was first shown to be effective in vitro (using a cultured ear in a dish)(McLean et al., 2017), and then in animals. Initial results in humans (a Phase 1b study)  found a single injection to be partially effective (McLean et al. 2021a; 2021b). However, subsequent clinical trials with repeated, multiple doses have been less successful. It seems that the middle ear adapts to the repeated injections so that drug is cleared more rapidly before it can get to the cochlea (my speculation, this has not been proven). Nevertheless, this approach to restoring high-frequency hearing loss remains highly promising, once the technical challenges of getting therapeutic amounts of drug into the cochlea are overcome.

The entire paper is available for download from Otology & Neurotology here

The study showed that word recognition was significantly increased in patients after treatment with the formulation FX322 applied intratympanically (i.e. injected through the eardrum into the middle ear space). Intratympanic injection is a simple office procedure that does not require general anesthetic and takes just a few minutes. 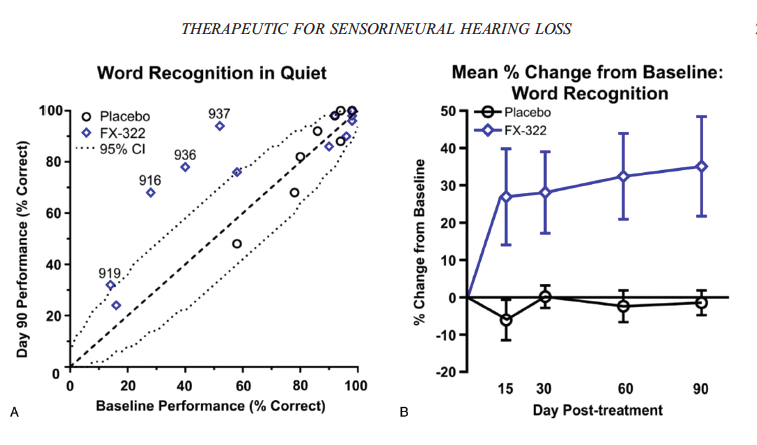 Our involvement in the study concerns the distribution of the applied drugs in the ear. Generating the required drug levels in the human ear is exceedingly difficult due to the size and inaccessibility of the ear. We measured drug levels achieved in guinea pig ears with different formulation combinations, allowing formulations most suitable for the human ear to be established. Computer modeling of drug distribution the human ear, based on kinetic parameters established in guinea pigs, confirms the likely drug distribution in humans resulting from the therapy. Our analysis shows that the drugs reach therapeutic levels in the basal, high frequency part of the ear - the part most commonly affected by noise and aging. 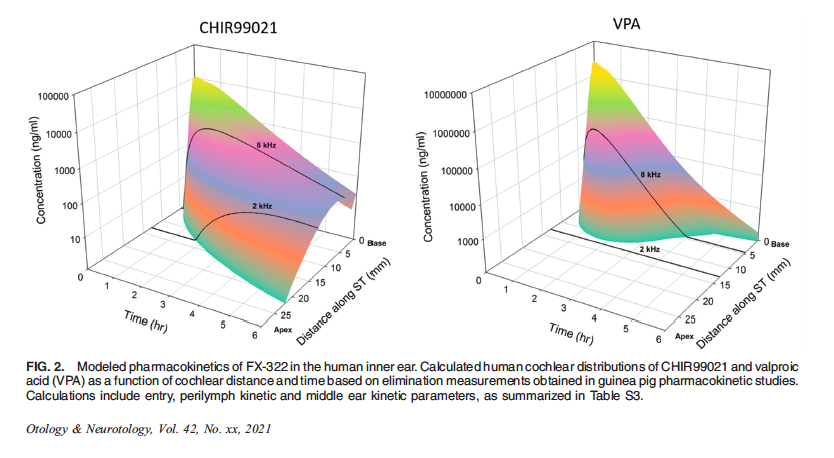 In our view, this is a major advance in drug therapy of the inner ear.

This is the first time that new, functioning hair cells have been generated in human ears with an intratympanically-applied drug formulation.